4 Reasons Why I Had the Best Anniversary Weekend Ever

Or, 4 Reasons Why, If You Live in the Detroit Metro Area and Frequent Zoos or Used Bookstores, You May Have Witnessed Some Weird Girl Seriously Geeking Out

For years I’ve fantasized about owning my very own copy of the world’s most amazing dictionary. What’s so amazing, you ask? (Shhh. We’re pretending you did actually ask.) Well, for starters, let’s look at this quote from the preface of the 1933 edition:

“The aim of this Dictionary is to present in alphabetical series the words that have formed the English vocabulary from the time of the earliest records [ca. AD740] down to the present day, with all the relevant facts concerning their form, sense-history, pronunciation, and etymology. It embraces not only the standard language of literature and conversation, whether current at the moment, or obsolete, or archaic, but also the main technical vocabulary, and a large measure of dialectal usage and slang.”

In other words, let’s define every single word ever used in the English language and then, because that’s not awesome enough, let’s also track its history and usage in meticulous detail and illustrate with examples from literature so that entries for words like “red” require eight whole pages. There is only one response to that, and it is ::SWOON::. (If you’d like to read more about the fascinating history of the dictionary’s creation, which required decades to complete, I enthusiastically recommend The Professor and the Mad Man by Simon Winchester.) So anywho, I’ve been salivating over the OED for ages but I’ve never had a freaking fortune to spend on one. I’ve just been yearning from afar until Friday when I found a used compact 1991 edition in beautiful condition at John K. King Used and Rare Books in downtown Detroit. And—brace yourself—it was only $45. Seriously, y’all. I am not even joking. Of course it didn’t come with its original slipcase and magnifying glass, but who needs that? I picked up a $20 4x dome magnifier at Barnes & Noble and I’m set. For $65 I have what Amazon is selling for $360. If I had a trumpet, I’d be playing fanfares in your face right now.

This compact edition is a micrographic reproduction of the original 20-volume set, meaning there are 9 tiny pages on each large page which must be read using a magnifier. It’s ideal for people with empty wallets and full bookshelves (i.e., me).

2. I enjoyed The Avengers so much I think I have to nominate it for “Best Movie Autumn Has Seen In, Like, A Long Time.”

I saw Thor, which was only ok, and I was also disappointed in the lackluster Iron Man 2, so I never even bothered to see Captain America after it got mediocre reviews. Thus my expectations for The Avengers were pretty low. Wow, did I get my socks knocked off. The action sequences were after a girl’s own Die-Hard-loving-heart, the characters were so artfully developed that my English major soul was leaping for joy, and the constant injections of humor kept the whole thing beautifully balanced between tension, poignancy, and fun. In fact, it was so good that we saw it twice, and we caught the 3D show for the second time around—even more awesomeness. The graphics are just stunning. Go see it right now!

3. I saw a red panda at the Detroit Zoo.

This animal is so cute it makes me want to die. And if you don’t know what a red panda is, check out these pictures first. Then watch the video below. Say goodbye to your reason and prepare to hyperventilate from all the awwww-ing.

And I actually saw one in the flesh! Walking around on its widdle furry paws wiv its widdle fuzzy face and fwuffy stripey tail ANNNNHHH ::blackout::

I feel sorry for everyone who didn’t marry him. He’s my favorite person on the planet and all the things I want to do and see in this big wide world would be completely blah if he weren’t there too. Look at us. Aren’t we presh? Five years, people. #winning 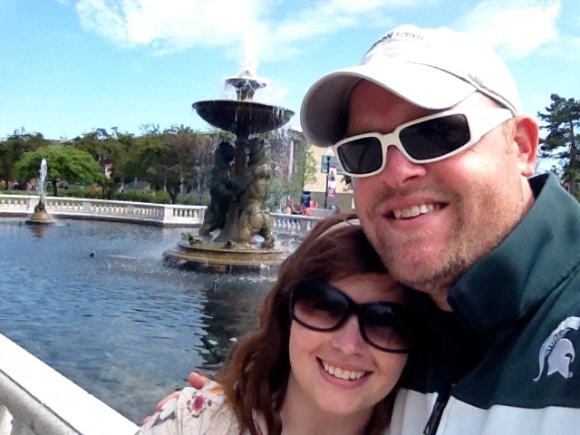 Our pictures together are a constant (painful) reminder of my dwarfishness.